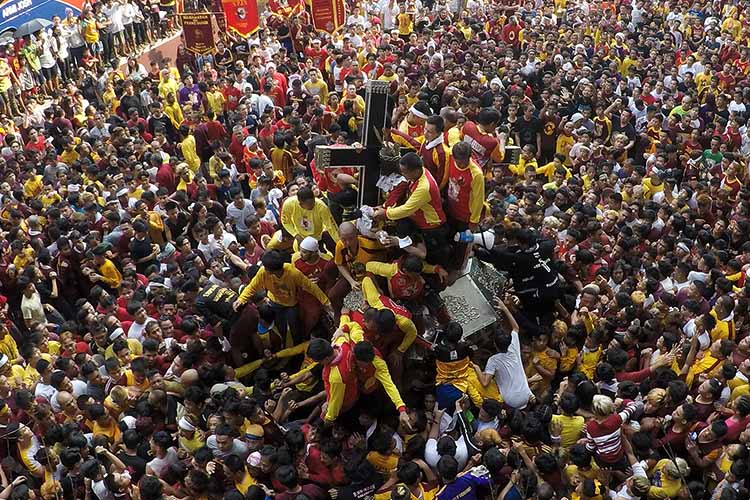 MANILA – Amid existing quarantine protocols, Quiapo Church officials said they sought the government’s approval to push through with the ‘traslacion’ or the procession of the Black Nazarene in January 2021.

“We are just waiting for the big news. We are hoping, but if they will not allow us, we will push through with it, but it will not be the same, not like what we are used to,” Fr. Douglas Badong, parochial vicar of the Minor Basilica of the Black Nazarene, said in an interview on Thursday.

“Usually six months preparation before traslacion, but for now we have yet to set meetings with other stakeholders. But, for us in Quiapo, we have conducted meetings. We are preparing for the worst-case scenario,” he said.

Asked if the Inter-Agency Task Force for the Management of Emerging Infectious Diseases (IATF-EID) would not allow them to hold the procession, he said they would just celebrate Mass for the occasion.

“We will conduct the Mass here, we will put up makeshift chapels in designated areas, but we cannot control the people who are going inside the church. That is why we are waiting for the IATF on how many people will be allowed inside the church for traslacion,” he said.

Meanwhile, Monsignor Hernando “Ding” Coronel, Quiapo Church rector, is hoping that the traslacion will push through early next year.

“We hope the traslacion pushes through, although it will be very much scaled down. There was no traslacion in Bicol due to the pandemic. My wish to Our Lady of Penafrancia is for our traslacion to push through in January,” the Catholic priest added.

The annual procession in the said region is being held every September.

Badong and Coronel earlier said they are ready to face the investigation of the Joint Task Force Covid Shield on the motorcade of the image of the Black Nazarene on Monday, which is a supposed violation of prohibition on mass gatherings under quarantine protocols. Ferdinand Patinio / PNA – northboundasia.com