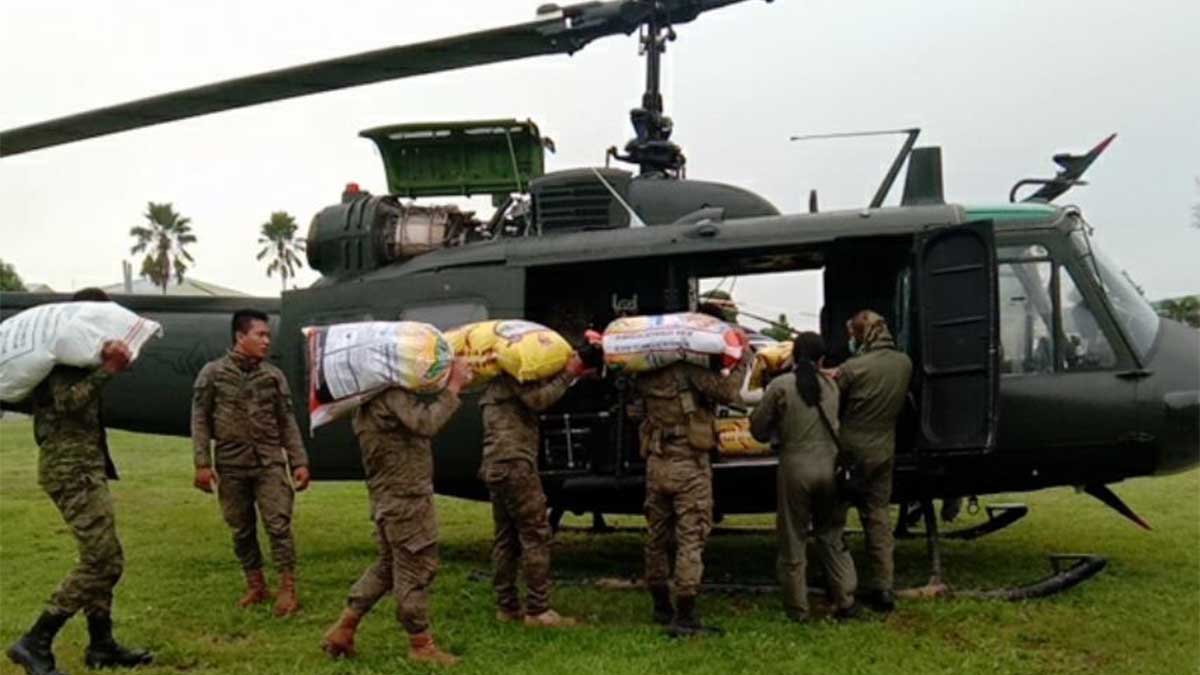 MANILA – An official of the Armed Forces of the Philippines (AFP) called “unfair” the unfounded criticisms against military units and personnel hard at work in the ongoing rescue and relief efforts for communities devastated by a series of strong typhoons since October.

In the said video, the helicopter was seen hovering and offloading relief goods that had typhoon victims scrambling towards it shortly after the aircraft lifted-off.

Netizens claimed this could have been handled more properly.

“Internet bashers are criticizing the decision of the pilots and crew to drop the goods in the small spot in the middle of the flooded area. May we inform the public of (these) circumstances that they do not know. The civilians receiving the relief goods are trapped in the flooded areas,” Arevalo said in a statement sent to the Philippine News Agency (PNA) Tuesday.

In defending the actions of the helicopter pilots and crew, Arevalo likened the aircraft to birds from Noah’s Ark looking for a good and secure place to land.

“At the time of the delivery of relief goods, the pilots are in an already unfamiliar terrain, iba na ang nasa map kaysa sa flooded situation (the place in the map was very much different from the actual flooded situation) because the previous dry land was transformed by (the) flood(s) into a huge lake,” he added.

While looking for a suitable landing place, Arevalo said the pilots spotted a small spot of dry land that they decided would become their drop point.

The helicopter pilots and crew were faced with a dilemma, however, as they cannot land on that spot because doing so would eliminate the drop point for relief goods and run the risk of the helicopter being stuck into the mud due to its weight.

At that time, he said, the pilots decided to “safe-drop” the relief goods and depart immediately so that the typhoon victims can collect the relief items as fast as they can.

“The longer the heli stays there, the longer that the people cannot come close to a hovering helicopter mainly due to the strong propeller blast of the helicopter blades,” Arevalo said.

He added that the public should also know how risky the decision of the pilots was at the time as the helicopter’s balance was changing while the relief goods were being unloaded.

Arevalo said the skid of the helicopter could have touched the ground or mud at any time, which could cause an accident that would risk the lives of the pilots and crews involved.

“But (they) took the risk for the sake of the people needing the much-needed supplies,” he said.

“Kung ikaw kaya ang nasa ganoong sitwasyon, ano ang magiging desisyon mo? (If you were in that situation, what would be your decision?),” he asked.

The military, he added, has shifted to massive relief distribution and rehabilitation operations from rescue missions.

To do this, AFP chief-of-staff Gen. Gilbert Gapay has directed all land, sea, and air assets of the military to transport relief and construction materials to the devastated areas.

Meanwhile, AFP deputy chief-of-staff for operations, Major Gen. Edgardo de Leon, said such criticisms are demoralizing considering that AFP personnel have been hard at work and without rest since October 30 preparing for the effects of Super Typhoon Rolly.

“Unfair sa mga tropa natin (It is unfair to our troops). I have (been) directing AFP operations since October 30, even before the typhoon hit the land. Wala pa kaming pahinga (We still have no rest yet),” he added.

Saying they are not seeking any recognition for their efforts, de Leon urged those doing nothing to help the typhoon victims to just keep their peace instead of criticizing the Army, Air Force and Navy troops heavily involved in the relief and rescue works.

AFP deputy chief-of-staff for plans Major Gen. Samuel Gotico said the UH-IH helicopter would have sunk on the ground had the pilots decided to land.

“The UH-1H max take-off weight is around 4.5 tons. It will sink on that small piece of soft soil available for dropping that precious relief goods,” he added.

Gotico, an accomplished PAF pilot himself, said the two pilots skillfully hovered the helis about two to three feet above the ground in order not to damage the aircraft.

“In some instances, they have to do ‘touch-and-go’ to save time in order to deliver more relief goods to more victims before sunset. While thousands are appreciating these acts, there are really people who have nothing but ‘negative’ on the efforts of the government,” he added. Priam Nepomuceno / PNA – northboundasia.com