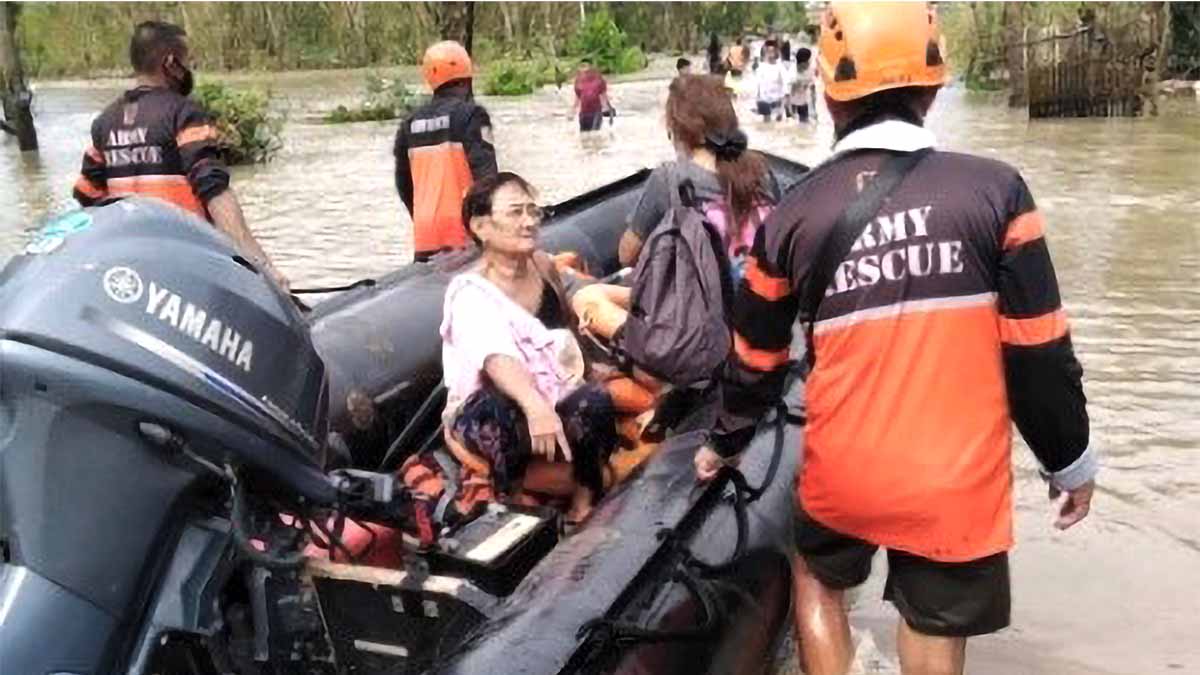 MANILA – Rescue units of the Armed Forces of the Philippines (AFP) have successfully rescued 2,727 persons from the onslaught of Typhoon Ulysses.

“The Armed Forces of the Philippines will never waver in carrying out our duty to protect the wellbeing of our people. As defenders of peace and security, the AFP is one with the Filipinos as we rise as one nation from the devastation brought by Typhoon Ulysses,” AFP chief-of-staff General Gilbert Gapay said in a statement Friday.

The number of rescued persons can be broken down into 2,716 in the National Capital Region (NCR), Rizal Province and Bicol Region, and 11 who were injured in Camarines Sur.

The program will activate military units as drop-off points for donations which will then be delivered to communities as part of the AFP’s relief operations service.

“Through our ‘Tulong Bayanihan’ program, AFP camps nationwide will serve as drop points for individuals, groups or organizations who intend to donate food and non-food items to typhoon victims,” Gapay said.

The AFP is the lead agency for the Search, Rescue, and Retrieval (SRR) Cluster of the National Disaster Risk Reduction Management Council (NDRRMC) Response Cluster.

“The AFP assures the public that disaster response operations will be prioritized to address the needs of the Filipino people. We will continue to assist the local government units in providing manpower, mobility, and equipment for the relief and rehabilitation of communities affected by Typhoon Ulysses,” Gapay added.

The 564th Engineer Construction Battalion led the search, rescue and retrieval operations as well as clearing operations in Los Baños, Laguna. The 80th Infantry Battalion, on the other hand, led rescue efforts in the towns of San Mateo, Rodriguez, Baras, and Tanay, all in Rizal.

Meanwhile, the 9th Infantry Battalion in coordination with the local government units conducted force evacuation to the residents of Barangays Malibago of Sipocot and Quitang, Bahay, and Sta. Rosa del Sur of Pasacao, all in Camarines Sur.

In the Bicol Region, the Joint Task Force Bicolandia led force evacuations, transportation of evacuees to relocation sites, and distribution of food relief goods. Among communities assisted were in Tinambac, Buhi, and Calabanga in Camarines Sur; Pandan and Virac in Catanduanes; and Legazpi City.

Disaster response units and essential assets under Northern Luzon Command on the other hand are on alert for possible deployment and augmentation.

It continues to intensify the conduct of coordination and close monitoring and coordination on both emergency operations centers of provincial and municipal disaster risk reduction and management offices.

As this developed, NDRRMC chair and Defense Secretary Delfin Lorenzana said he was satisfied with the way relevant government agencies responded before and after the onslaught of “Ulysses”.

Lorenzana also lauded all uniformed personnel, especially those from the AFP military, who responded to help those trapped in their homes by the heavy floods.