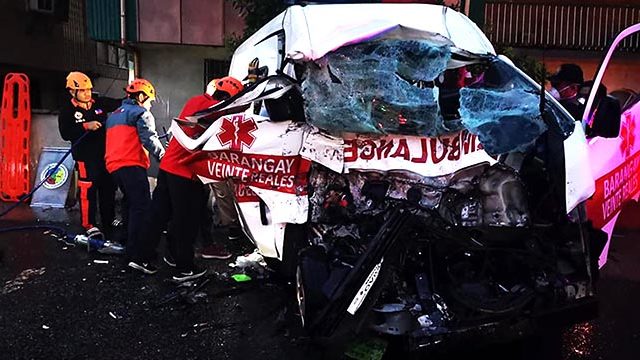 Those injured were Paulino de los Santos, 62, driver of the ambulance which is owned by the city government of Valenzuela; Desctrie Hufana, 15, of Viebte Reales, Valenzuela City, and a still unidentified woman passenger of the ambulance. All are still under observation at the medical facility.

Based on initial investigation of the San Juan police station, Delos Santos, was sent to a hospital in Batac, Ilocos Norte to pick up a patient for transfer to a medical facility in Valenzuela City. It was not clear whether the patient was one of the fatalities or whether the passengers accompanied De los Santos to Batac.

While on their way back from Batac, the delivery truck driven by Sebastian Torretio, 51, resident of Urdaneta City, Pangasinan, hit them along the national highway in San Juan, La Union.

The northbound truck allegedly went off course smashing into the southbound ambulance. Due to the strong impact, rescuers had difficultly removing the passengers who were pinned inside the
ambulance.

Three hurt victims were identified including the driver (delos Santos); Descyrie Hufana, 15, from Viente Reales, Valenzuela City; and a still unidentified women passenger. All were still in observation room.

Torretio and his helper were in good condition.