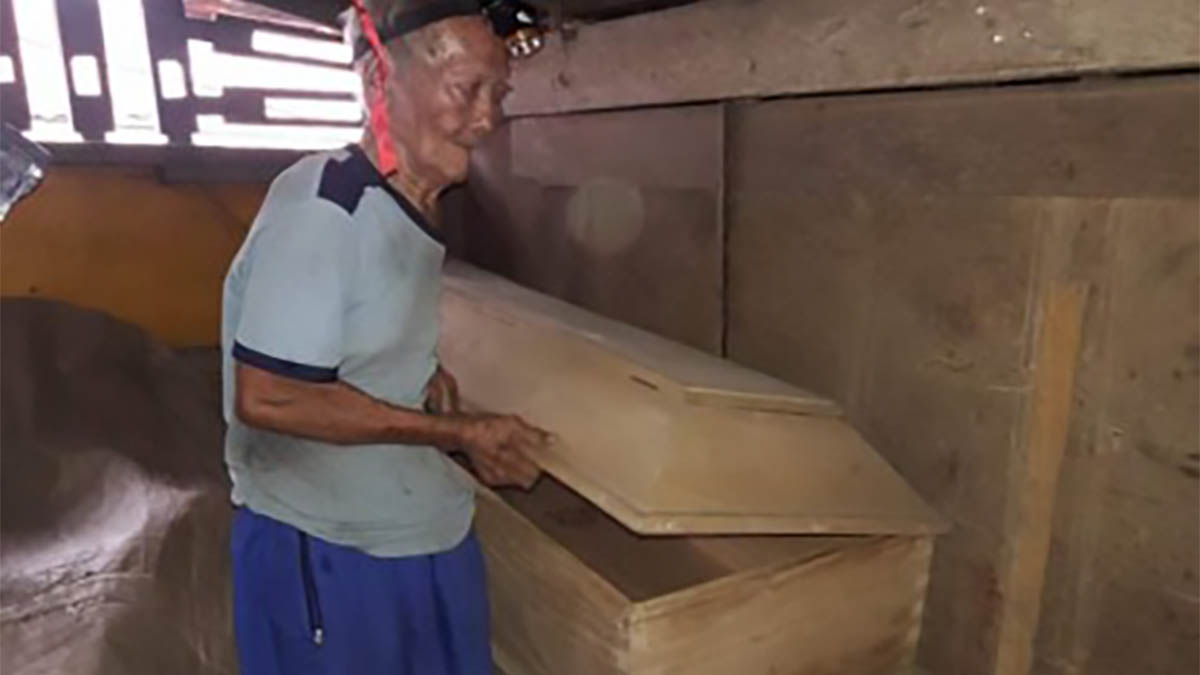 ILIGAN CITY — The senior citizen in Iligan City who prepared his casket at home years ago is now ready to die after his wife, who also prepared hers, died last January.

Luciano Tapic, 88, of Barangay Kiwalan, has asked his brother-in-law four years ago to make his casket so that his children would not be burdened “when my time comes.”

“I want my children to use this (the coffin) when I die. They can just paint it with any color, even black, it’s fine with me. I will make them dream about me when they do not use it,” Luciano, who is still very active, with a sharp memory and a clear sense of hearing at 88, said in an interview.

He related that he had asked some gemelina wood from his brother, saying it would be for a cabinet.

“Because I’m sure he will not give it to me if I told him I’m going to make my casket. When it was done and he saw it, he appreciated (it) and said he would make his, too,” Luciano recalled.

He got this idea from his wife, Flora, who prepared hers in 2000.

Flora’s casket resembled an airplane with protruding “wings” on its sides while that of Luciano’s is the typical coffin.

Flora’s wish, as she told her children, was to be placed in her “plane” casket. She, however, did not want to be buried in it. She wanted her body to instead be wrapped in white cloth, and for the casket to be placed on top of her tomb as a decoration.

She also prepared the burial site on their farm, about 1 km. away from their house.

But none of Flora’s wishes was fulfilled, as her children brought her another casket and she was buried in a private cemetery. “She will not know anyway. She is already dead,” said their second child, Aurora Fernandez.

Flora’s and Luciano’s caskets are kept on the second floor of their house, beside the room of one of their children, where their grandchildren sleep when they come to visit.

Fernandez said they have also prepared for their father’s “time”. One of their siblings bought Luciano a memorial plan but hid it from him until one day, a notice from the company arrived and it was Luciano who received it.

“But I will get back to them if they do not use my coffin,” Luciano said.

He, however, said it does not matter to him where he will be buried.

“For sure, when it’s his time to come, he will be laid beside our mother,” Fernandez said.

While there is this belief that those preparing for death would live longer, Luciano insisted that “If it is your time, it’s your time.”