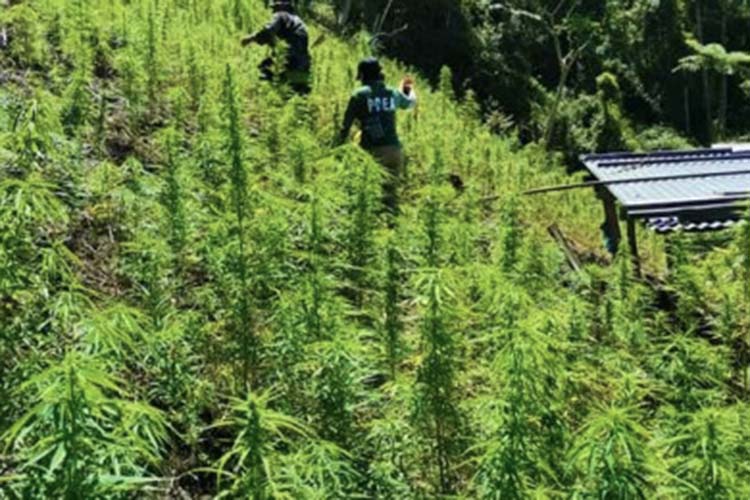 “The operation started on March 27 until March 28 where the group discovered 11 plantation sites with an approximate total land area of 18,550 square meters,” PDEA-Cordillera Director Edgar Apalla told the Philippine News Agency (PNA) on the sidelines of the “Oplan Harabas” event on Friday.

Apalla said the anti-narcotics operatives began to hike up the mountains of Tinglayan, Kalinga on March 27.

“A total of 337,700 pieces of fully-grown marijuana plants were uprooted, and also discovered were 20,000 grams of marijuana stalks, and 5,000 grams of dried marijuana, which were placed on separate sacks stacked on the site,” he said.

All confiscated and uprooted marijuana were destroyed at the site.

While the operation was ongoing, a checkpoint was set up along the highway in Barangay Buscalan, where several marijuana plantations had been discovered in the past.

“The conduct of the checkpoint was a pre-emptive measure to counter illegal drug trafficking within the vicinity,” Apalla said.

In a news release from the Police Regional Office – Cordillera, Brig. Gen. Israel Ephraim Dickson said the existence of the plantation sites were validated prior to the operation.

“The operation plan of the police was crafted in order to clear all drug-affected barangays in Kalinga. However, prior to the operation, casing and zeroing of target plantation sites were made by the intelligence personnel of Tinglayan police,” Dickson said.

“Our operation against marijuana will continue and our anti-narcotic agents will sustain the operation and regularly visit those plantation areas to discourage the people from cultivating marijuana. We will continue to unfold more marijuana plantations to clear all barangays from illegal drugs,” he added. PNA – northboundasia.com