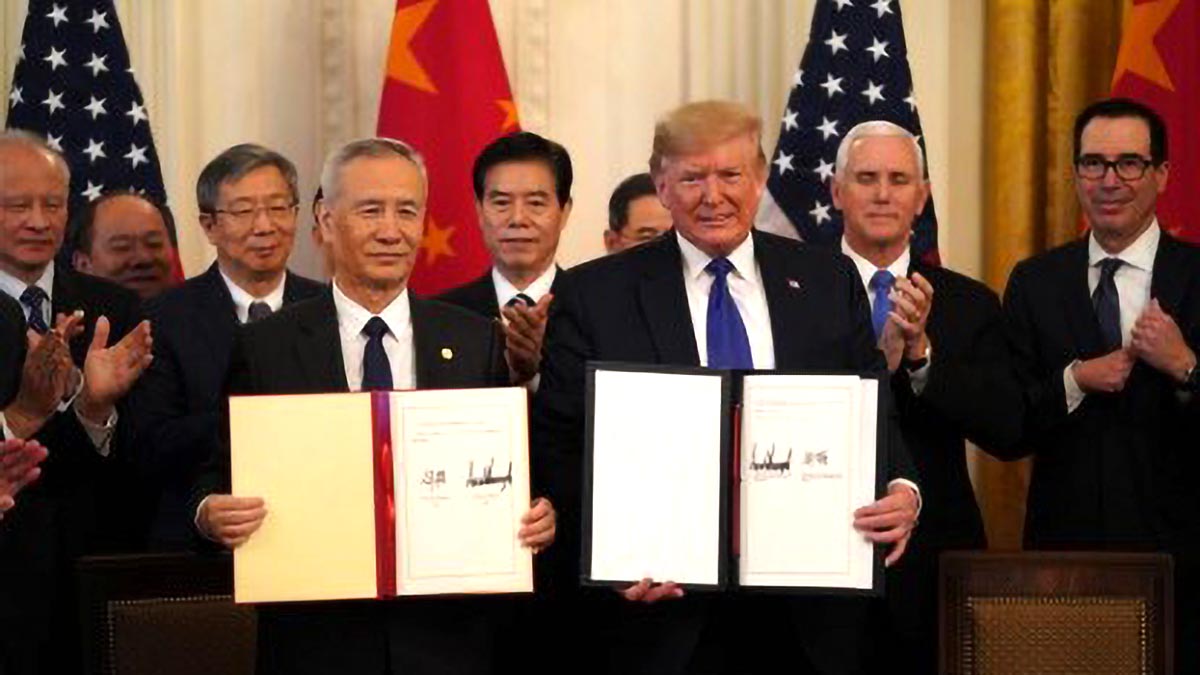 The agreement was signed by US President Donald Trump and Chinese Vice Premier Liu He during a White House ceremony attended by droves of government officials and business leaders.

Trump called the initial pact a “momentous step, one that has never been taken before with China” during marathon remarks in the East Room.

“For decades American workers, farmers, ranchers, manufacturers, and innovators have been hurt by the unfair trade with China,” Trump said, noting in particular what his administration has said is Beijing’s policy of forcing American firms to transfer technological know-how and trade secrets in order to conduct business in China.

“Now our efforts have yielded a transformative deal that will bring tremendous benefits to both countries,” he added.

Chinese President Xi Jinping said in a letter read aloud by Liu that the conclusion of the initial agreement “is good for China, the US, and the whole world.”

“It also shows that our two countries have the ability to act on the basis of equality, and mutual respect, and work through dialogue and consultation to properly handle and effectively resolve relevant issues,” Xi, who did not attend the ceremony in person, said, noting that the focus for Washington and Beijing now shifts to implementation.

The US-China trade war has rattled global markets on fears it could spark a global slowdown.

At issue for Washington is a lopsided trade imbalance with China — the US had a USD378.6 billion trade deficit with China in 2018, according to the Office of the US Trade Representative — as well as concerns over intellectual property theft, including what the Trump administration says is Beijing’s policy of forced technology transfer.

China agreed “to make significant reforms” as part of the deal, including enhancing intellectual property protections and ending forced technology transfer, according to the White House, which said China further promised to make “substantial” purchases of American goods and services “in the coming years.”

The agreement establishes a mechanism for the parties to resolve disputes during its implementation.

Trump has imposed wave after wave of US tariffs on Chinese goods and China has responded in kind. To date, the US has imposed tariffs on roughly USD360 billion in Chinese imports.

Trump maintained US tariffs would remain in place until a final deal with China is reached “because otherwise, we have no cards left to negotiate with.”

Ahead of the agreement’s formal signing, the Treasury Department dropped China on Tuesday from its list of currency manipulators.

Treasury Secretary Steven Mnuchin, who has played a key role in trade talks with China, said Beijing “has made enforceable commitments to refrain from competitive devaluation while promoting transparency and accountability” during the negotiations.

Instead of being treated as a currency manipulator, China is now on a “monitoring list” of US trade partners that “merit close attention.” The list includes Germany, Ireland, Italy, Japan, South Korea, Malaysia, Singapore, Switzerland, and Vietnam. (Anadolu)