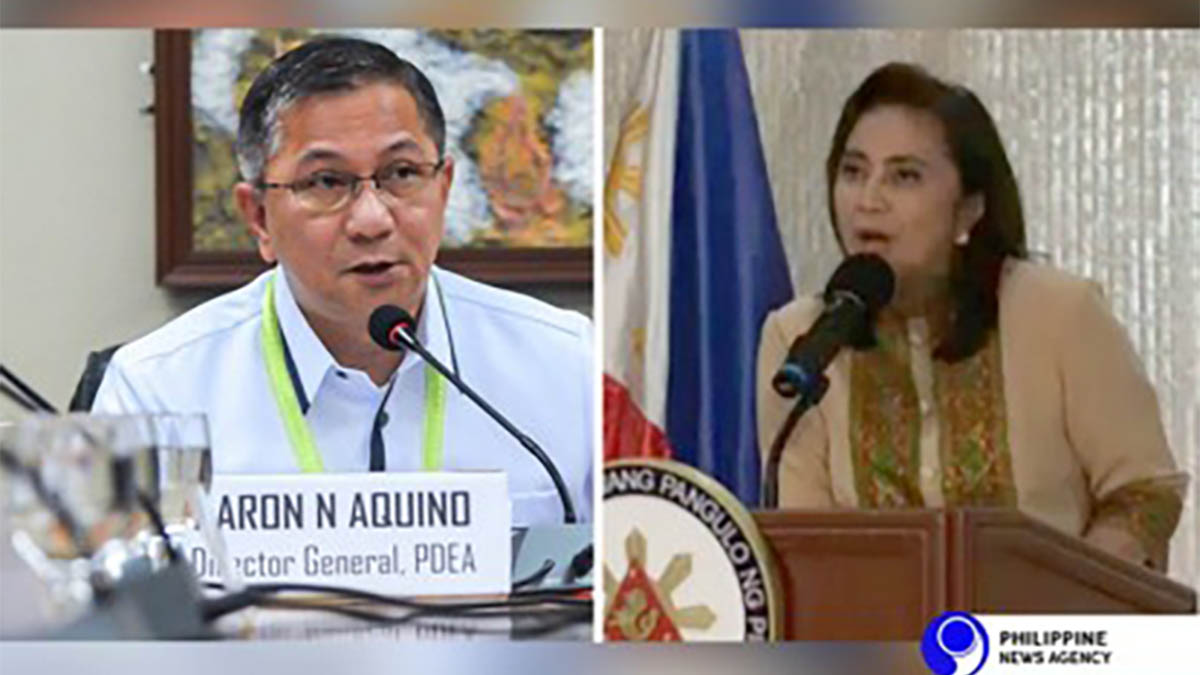 MANILA — Vice President Leni Robredo did not see the “total picture” of the drug menace in the country during her short stint as Inter-Agency Committee on Anti-Illegal Drugs (ICAD) co-chairperson, the head of the Philippine Drug Enforcement Agency (PDEA) said on Thursday.

PDEA Director General Aaron Aquino, who concurrently heads ICAD, said Robredo was “misinformed” due to her failure to meet with three of four ICAD clusters.

Aquino added that the Vice President might have felt “overwhelmed” by invitations from other international communities, such as the
United States and the United Nations Office on Drugs and Crime (UNODC) to discuss President Rodrigo Duterte’s anti-narcotics campaign.

Aquino’s statement came four days after Robredo announced that she would be releasing her findings on the government’s crackdown on illegal drugs through a “report to the nation” on December 16.

Duterte was prompted to appoint Robredo on October 31 as Aquino’s co-chair at ICAD, after the Vice President claimed that his administration’s drug war is “obviously not working.”

Robredo was originally assigned as ICAD co-chair until June 30, 2022 but was stripped of her role at the anti-drug body following her supposed failure to present new measures in curbing the drug proliferation in the country.

Aquino explained that Robredo was only able to meet with ICAD’s enforcement cluster, which is tasked to conduct anti-illegal drug operations with the support of other law enforcement agencies through the PDEA and the National Anti-Drug Task Force.

The Vice President, however, missed the opportunity to hold a dialogue with the justice; advocacy; and rehabilitation and reintegration clusters.

The anti-drug panel’s justice cluster is primarily responsible for the expeditious prosecution of all drug cases and the provision of legal assistance to law enforcers, while the advocacy cluster is mandated to conduct a nationwide advocacy campaign for the government’s anti-illegal drug policy and programs.

Aquino said Robredo could have provided more recommendations on how to deal with the drug problem, had she met with the four ICAD clusters.

Aquino also noted that Robredo had “refused to be briefed” on the roster of high-value targets and on the administration’s accomplishments to fight illegal drugs, since her scope of authority at that time remained unclear.

Robredo served as co-chairperson of the ICAD for 19 days.

In a media interview on Monday, Robredo said she would make public the report that contains her discoveries and recommendation on how to improve the government’s efforts against illegal drugs.

Aquino believed that the report that would be released merely includes the two reports from Robredo submitted to the President when she was still with ICAD.

Unfazed by Robredo’s impending release of the report, he said the current administration is ready to hear her side, be it “good or bad for the administration.”

“If there is (If she has a discovery), I urge her to open up. Hindi kailangan i-tago (There is no need to hide it). Kung ano yung discoveries na nakita niya (Whatever discoveries she has), whether good or bad for the administration, then go,” Aquino added.

Robredo’s recommendations to be considered

Acknowledging that Robredo “did well” as ICAD co-chair, Aquino said the anti-drug body is open to considering the Vice President’s recommendations to improve the government’s handling of the country’s drug problem.

He said he had already instructed all ICAD members to assess Robredo’s suggestions until January 2020.

He also raised the possibility of adopting the proposals made by the Vice President in case the ICAD finds them “beneficial”.

“We’ll see if it’s credible or not,” Aquino said. “If it would be beneficial to the ICAD, why not? Let’s follow her recommendation. And I distributed the letters to all ICAD members and I asked them to comply.”

The ICAD, created through an Executive Order inked by Duterte on March 6, 2017, is mandated to ensure the member-agencies’ implementation of and compliance with all policies, laws, and issuances on the government’s anti-illegal drug campaign, in an
“integrated and synchronized manner.”

Other members are the departments of the interior and local government, justice, health, education, social welfare, trade, agriculture, and defense, as well as the customs and immigration bureaus.

ICAD better off without Robredo

Aquino said Robredo could still help the government even though she no longer heads the ICAD.

He noted that the ICAD is “better off” without Robredo, since it could fulfill its mandate without feeling any discomfort.

“Number one, it’s hard for me to dictate dahil Vice President siya, Usec lang naman ako (because she’s Vice President and I’m only an Undersecretary). Pangalawa, hindi ko rin ma-dictate kung ano ang dapat niyang gawin or hindi (Second, I could not dictate what she can or cannot do),” Aquino added.

He also said at the moment, he sees no need to appoint a new co-chair.

Aquino, however, added that it would be fine if the next ICAD co-chair would be the “same level” like him.  Ruth Abbey Gita-Carlos / PNA – northboundasia.com