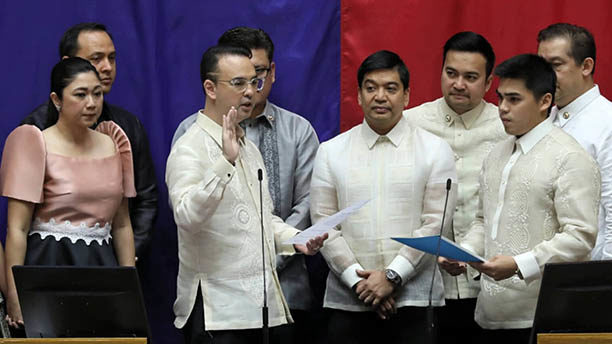 MANILA — After a lengthy and hotly-contested race to the speakership, the House of Representatives on Monday formally elected Taguig-Pateros Rep. Alan Peter Cayetano as Speaker of the 18th Congress in what turned out to be a drama-free election.

In his nomination speech, Duterte first manifested that he was against the term-sharing agreement brokered by his father, President Rodrigo Duterte.

“Mr. Presiding officer, before I make a nomination, I would like to manifest a problem. That the term sharing agreement, one between Congressmen Cayetano, Romualdez, Velasco and the President, I am against any term sharing agreement. However, if the Speaker is replaced after 15 months, then we will have to elect a new Speaker,” he said.

“Mr. Speaker, I nominate a leader who understands local and national problems, one who can bridge the different branches of government, one who can deeply and seriously represent the House of Representatives and the Philippines in the international arena. Mr. Speaker, I nominate the distinguished gentleman from the district of … Taguig-Pateros Alan Peter Cayetano,” Duterte said to loud applause from the plenary.

Duterte’s nomination of Cayetano was followed by Velasco and Romualdez.

“Mr. Presiding Officer, I hereby nominate the gentleman from Taguig-Pateros, the honorable Alan Peter Cayetano for Speaker of the 18th Congress of the Philippines,” he said.

With Duterte, Romualdez, and Velasco throwing their full support, Manila 6th District Rep. Bienvenido Abante Jr. was nominated as the other candidate for Speaker.

The returning Manila congressman got 28 votes.

Meanwhile, Cayetano will serve as Speaker in the first 15 months of the 18th Congress under the term-sharing agreement brokered by President Duterte.

He will then relinquish the Speakership to Velasco, who will lead the House during the succeeding 21 months.   Jose Cielito Reganit / PNA – northboundasia.com